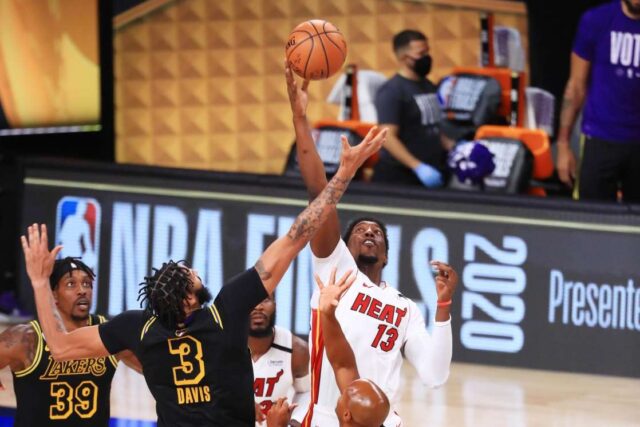 Jimmy Butler scored a 35-point triple double as Miami Heat defeated Los Angeles Lakers 111-108 yesterday morning to force a NBA Finals Game Six today, writes standard.co.uk.
With their backs against the wall, the Heat refused to back down, surviving a 40-point onslaught from the Lakers LeBron James, thanks to outstanding three-point shooting, clutch-free throws and the all-round brilliance of Butler.
The Lakers, who trailed for most of the contest, had a chance to win it in the final seconds, but Danny Green’s three-point shot came up short. The Lakers’ Markieff Morris got the rebound but threw the ball out of bounds.
Rookie Tyler Herro was fouled on the ensuing inbound pass and coolly sank two free throws to extend the lead to three points and the Lakers were unable to get off a good shot as time expired to cap the thrilling game.
The favoured Lakers, whose lead is now 3-2 in the best-of-seven series, saw forward Anthony Davis re-aggravate a right heel injury late in the first quarter.
Davis returned after sitting out for several minutes, but struggled to find a rhythm and could be seen hobbling up the floor in the fourth quarter.
A healthy Davis will be key to achieving the Lakers’ hopes of capturing a record-tying 17th title in Orlando, where the NBA resumed its season in a biosecure bubble in July, after a four-month hiatus over the Covid-19 pandemic.

Coronavirus: The different approaches to lockdowns in Africa

PDP threatens to boycott 2023 polls if no electoral reforms