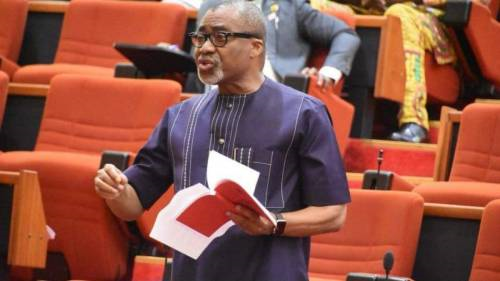 Senate Minority Leader, Enyinnaya Abaribe on Wednesday demanded President Muhammadu Buhari’s resignation office over his inability to provide security for Nigerians.
The senator minority questioned the president’s claim that he was surprised at the rising insecurity in the country, saying Nigerians voted the APC because they promised to tackle insecurity.
The PDP lawmaker during the debate said the president had done little to address the security challenges in Nigeria.
Speaking during deliberations on a motion on national security challenges and the need to restructure Nigeria’s security system, Abaribe said the president had done little to address the security challenges in Nigeria.
“…If you want to treat an issue, you go to the head. We did not appoint the IG or the security chiefs. We will go to the president and ask him to resign,” the lawmaker said.
“Nigerians voted APC because they promised to tackle insecurity but they have failed,” he said.
Senator Abaribe’s call for Buhari to resign expectedly caused a stir on the floor of the red chamber on Wednesday.
Abaribe spoke after the Senate Leader, Yahaya Abdullahi, presented his motion on rising security challenges in the country.
He said the attitude of the president to insecurity in the country, surprised him, adding that those who live by propaganda will die by propaganda.
Abaribe said he was building up to the fact that Buhari’s government claimed that Boko Haram had been defeated.
According to him, the hard work that was supposed to be done to secure the country was not done because of the propaganda.
He said that the recent Niger and Jos killings by Boko Haram terrorists indicated that the insurgency war was far from over.
He declared that the opposition members in the National Assembly were of the opinion that President Buhari should resign from office.
When the uproar generated by Abaribe subsided, Senator Abdullahi Adamu said Abaribe’s submissions were unnecessary.
The President of the Senate, Ahmad Lawan, also appealed to his colleagues to approach the issue with caution.
Meanwhile, President Buhari has vowed that his administration would be harder on bandits responsible for insecurity in the northern parts of the country.
The Nigerian leader made the statement on Tuesday, January 28, when Governor Abubakar Sani Bello of Niger state paid him a visit in Abuja, Vanguard reports.
The president said he was surprised about what Boko Haram had become considering what is happening in the northwest and other parts of the country.
He said his administration would be harder on the perpetrators of violence in the country, noting that the provision of security is one of the duties of government.

Ilaboya calls for calm after killing of two in Edo community

SuperSport explains why it has stopped broadcasting CAF matches