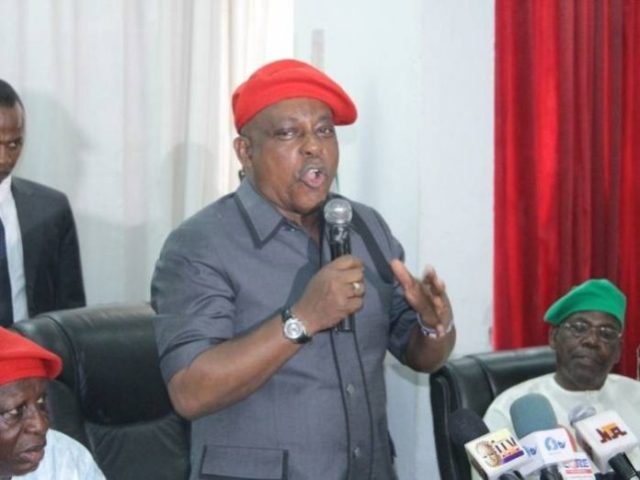 The People’s Democratic Party (PDP) will boycott the 2023 general elections if electoral reform were not carried out.
The party’s national chairman, Uche Secondus told a team from the International Republican Institute (IRI), who visited him at the PDP headquarters, in Abuja on Tuesday that the party’s decision to shun the polls was borne out of its experience recent elections, which he described as unpleasant.
He claimed the government, security agencies and the Independent National Electoral Commission (INEC) were working together to deny the people the right to choose their leaders.
Secondus noted that the country needed a new electoral law that would legalise electronic voting, as well as insulate the military and other security agencies from the electoral process. He said anything short of that would be unacceptable.
According to Secondus, “One of the areas we are looking forward to in our country is our electoral processes and laws. We believe they are antiquated, they need amendment. We need to improve on our voting patterns and the reporting of results from voting points and the transmission processes.
“They are all embodied in the electoral processes and amendment; without that, it will be difficult for us to think about contesting any election because previous experiences have been terrible and horrifying. The people in government with INEC and security agencies collaborate to deny the people their right. As we speak, both the legislature and judiciary have been caged and they are taking directive from the villa.
“So, these are areas that we need the collaboration of IRI and other international agencies. If people do not have the right to vote, what is the essence of election? People must come out of their houses to register and vote. They must have the right to go out there to vote and then be safe.”
He said the party had resolved to set up a committee to review the conduct of the 2023 polls, adding that the report would, to a great extent, determine if it would participate in future polls in the country.
“If there is no need, we will inform the leaders of our party, show them the facts and figures, people who have been killed, people who went to vote, if you cannot be guaranteed that you can go and vote and come back safely, what will be the need in 2023 to come and vote?”
Speaking during the visit, the Resident Program Director, IRI, Angela Wambugu, said electoral reform was much needed in the country.

Zidane ‘not under pressure’ as Ramos returns for Clasico

Giroud goal sinks Norwich as Chelsea get back to winning ways in top four...