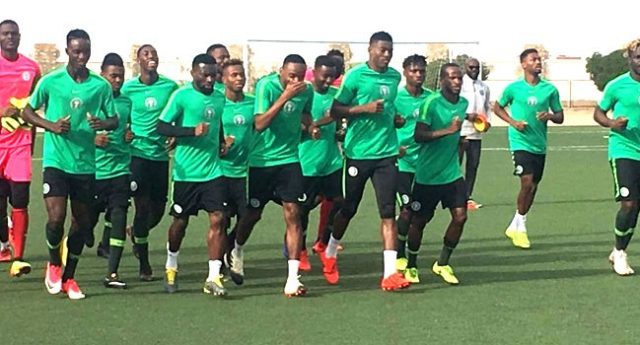 Nigeria’s chances of qualifying for the Tokyo 2020 Olympic Games football event got a huge dent yesterday when Cote d’Ivore defeated the U-23 Eagles 1-0 in the on-going African U-23 Nations Cup at the Al Salaam Stadium in Cairo, Egypt. It was Group B’s opening match of the 2019 CAF U-23 AFCON, which serves as qualifier to the football event of the 2020 Olympic Games.
The Eagles finished the west African derby with 10 men following a red card handed to defender Olisa Ndah in the 71st minute.
Nigeria U-23 goalkeeper Adamu Abubakar made a fantastic save in the 16th minute to deny the Ivoirians of a likely opener.
The first half petered away with both sides unable to get on the score sheet.
Nigeria’s head coach Imama Amapakabo made two quick fire changes in the 54th and 56th minutes respectively bringing on Sunday Faleye and Sunusi Ibrahim for Olabiran Muyiwa and Bright Enobakahre respectively.
Before Okonkwo was substituted, he had a great chance to score, seeing his header come off the crossbar from a corner kick.
Cote d’Ivoire grabbed the winner in the 71st minute after a controversial penalty awarded by Egyptian referee Mohamed Maarouf .
The match produced no further goals with the Nigerian side, the defending champions of the CAF tournament needing to defeat Zambia and South Africa to stand a chance of reaching the semifinals.
The first three teams at the end of the competition will qualify for the Olympic Games.