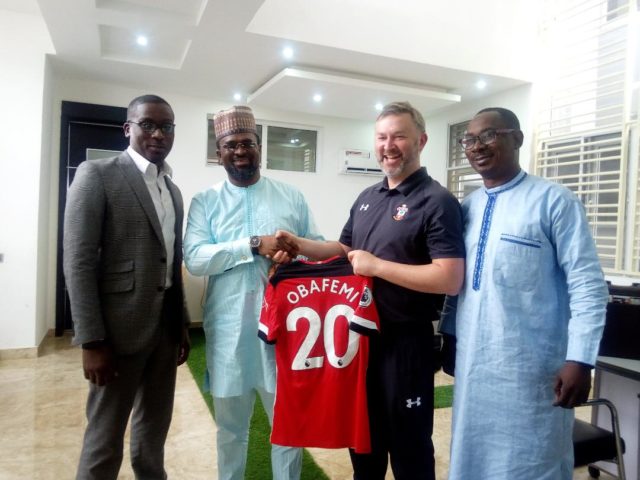 Southampton FC of England, which at the weekend unveiled their Nigerian academy, want to partner with FC Barcelona’s camp in the country to raise talented footballers from the grassroots.
Officials of Southampton Academy, also known as Saints Lagos Academy, visited FC Barcelona Academy at Lekki, to preach the need to partner with the existing camp to harness the plethora of talents being wasted in Nigeria and develop them to international stars.
Southampton’s Global Development Manager, Matthew Sanger said his team established Saint Lagos to do things the right way.
“Our Academy and professional club is around to develop the whole player and person and we want to partner with organisations around the world, which we do currently for the right reasons, because it is not just about sports development, but making sure the person is well grounded to contribute to the world around him in a positive way,” he said.
Receiving the Southampton team in his camp, the Chairman, Blaugrana Sports Group, promoters of FC Barcelona camp in Nigeria, Leslie Oghomienor harped on the importance for groups like Southampton and Barcelona to support youth football development in the country.
He said it had become imperative for the two clubs to collaborate and learn from each other, adding, “There is quite a lot they can learn from Barca academy because we have been here for three years and we have the experience we will be able to share with them.
“We will share information and resources definitely, so you will be seeing a lot more of this kind collaboration in the future. The opportunity for Nigerian youth footballers is here, so the platform will be improved upon to teach the budding players how they will perform as young processionals,” he said.