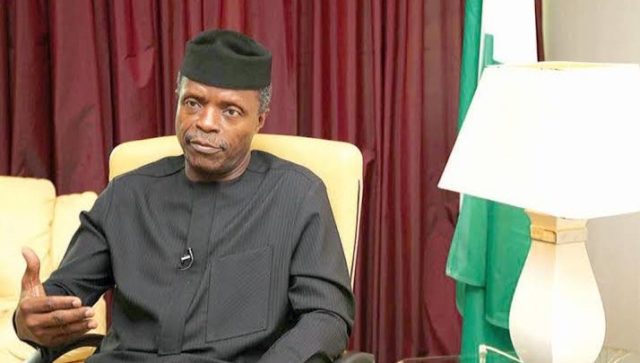 Of late, Nigeria’s Vice President, Prof. Yemi Osinbajo has been in the news over allegations of financial impropriety leveled against him by some individuals in the polity whose motives are yet to be fully discerned.

Among the traducers of the Vice President is Mr Timi Frank who outrightly accused the Vice President, in the media, of mismanaging N90billion allegedly released to the ruling All Progressives Congress(APC) for the 2019 general elections by the Federal Inland Revenue Service(FIRS).

Another phantasm that appears to haunt the VP is the allegation by one Katch Ononuju, a political analyst, claiming that Prof. Osinbajo “used” federal agencies under his supervision as vice president “to stack funds” for 2023 general elections supposedly for his much rumoured presidential ambition in the coming years.

To a lot of political spectators and gladiators, what is happening presently to Mr Vice President is akin to what happened to former Vice President Atiku Abubakar under the then President Olusegun Obasanjo.

Recall that about February 2007, senators of National Assembly accused Alhaji Atiku of diverting more than $100m (£51m) in public funds to private interests. Consequently, a Senate inquiry was conducted into the allegations which indicted him and recommended that Mr Abubakar should be prosecuted for siphoning off money to companies connected to him.

Although Atiku Abubakar managed to wriggle out of the woods but his adversaries largely succeeded in their sole mission which was to scuttle his ambition to succeed his boss, Obasanjo, in 2007. All that happened then ended up as mere politics and hitech political conspiracy and not the true face of anti-corruption war as it was then painted. At last Atiku was stopped and the cabal had their way.

With Prof. Osinbajo being accused of misappropriation of N90billion campaign funds as well as allegedly stacking money for 2023 election, it is glaring that something is smelling. There is more than meets the eyes in the who episode. The cabal at the presidency appears to be at work again, maybe to rubbish or diminish the credibility of Osinbajo for the singular purpose of stopping him come 2023. This whole game appears to be a mere replay of the Atiku Abukakar scene in our body polity.

The question one is compelled to ask here is: Could it be the apparently impeccable
credibility of this “Man of God” and soft-spoken Vice President that is fueling the fury of the cabal to declare a war against him? Despite his humility and avowed loyalty, he appears to have been deliberately placed on the slaughter table, whether guilty or not guilty. If it is not a case of “calling a dog a bad name in order to hang it,” what other reason is behind this viral mudslinging against such a quintessential gentleman, Pastor and renowned academic who has meritoriously climbed to the rooftop of his chosen profession as a lawyer.

As an eloquent testimony of his unparalleled humility and patriotism, Osinbajo, last week offered to waive all about immunity as Vice President to face probe, just to clear his name of the rot being labelled against him. That, I know, has sent jitters down the spines of those fighting the just man.

Another critical question that bugs the mind is on which side Senator Ahmed Bola Tinubu, the APC national leader and tribesman to the embattled Vice President is, in this whole imbroglio. It is shocking that Tinubu is not supporting his ‘political’ son and brother or is he working in concert with those fighting Osinbajo? Or could it be right to presume that Tinubu’s hands are tied? Whichever way, Tinubu’s silence cannot be golden at these trying times since the ball is obviously in his court to play it right.

Surprisingly, in the midst of this whole drama, while the Christian Association of Nigeria(CAN) has thrown its weight behind Osinbajo dismissing the N90billion allegation as hoax, a known cleric and a fellow Yoruba man, Pastor Tunde Bakare appears to be thrown spanners in the works. The question here is, what does Tunde Bakare want? Does he want the seat of Osinbajo or what? Is he a Christian as widely professed? What wrong has Osinbajo done to him that could make him align with his detractors? These pertinent questions fervently beg for answers urgently.

As for Mr President, the Commander in-Chief of the Nigeria Armed Forces, Muhammadu Buhari, GCFR, shall it be right to think that he wants to reward a humble, loyal and dependable VP like Osinbajo with impeachment or removal from office when he had over the years manifested unequalled allegiance to him. It is certainly not good
to pay one’s trusted ally or friend with a bad or counterfeit coin. Let Mr President think and rethink about this and “PUT NIGERIA FIRST” in this new initiative of the cabal.

.Nwankwo is the spokesperson of #PutNigeriaFirstInitiative#